A business talk by Zeinab Badawi 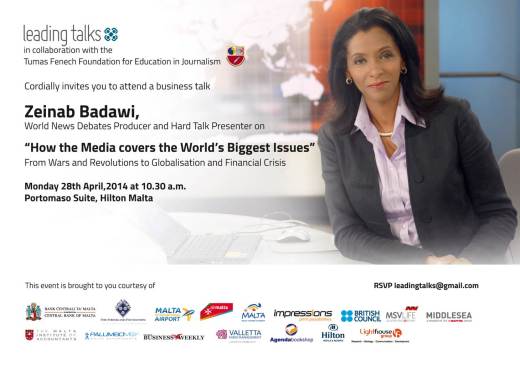 On Monday, 28 April, Leading Talks, in collaboration with the Tumas Fenech Foundation for Education in Journalism, is hosting Zeinab Badawi for a talk entitled: How the media covers the world’s biggest issues: from wars and revolutions to globalisation and financial crisis.

President Emeritus Dr Ugo Mifsud Bonnici, chairman of the Tumas Fenech Foundation for Education in Journalism (FTFEĠ), who will open the event, said the foundation is delighted to co-partner with Leading Talks and to be associated with such a high-level speaker.

This is the fifth event organised by Leading Talks, an initiative led by Josephine Vassallo Parnis who, from time to time, invites established foreign speakers to Malta to share their knowledge, insight and vision on key issues of topical interest.

According to Ms Vassallo Parnis, the event should attract the interest of not only the media but also of industry leaders who have a keen interest in international issues and follow Ms Badawi’s debates.

Zeinab Badawi is the presenter of World News Today, one of BBC World News’ flagship news and analysis programmes, a Hardtalk producer and an award-winning journalist. She has interviewed some of the world’s leading politicians, thinkers and cultural figures. Her programmes feature an emphasis on analysis and debate, bringing context and understanding to the most complex events.

Previously a presenter of BBC World News’ The World, Ms Badawi has worked in UK broadcasting for two decades. She has been involved with a range of programmes, reporting from Europe, Asia and Africa, where she covered the famine in the mid-1980s. After reporting and presenting programmes on UK politics from the BBC’s Westminster studios, Ms Badawi joined BBC World News, where she has become a regular face, presenting debates on major issues as well as being a presenter of Hardtalk, interviewing such personalities as the Dalai Lama, President of Sudan Omar al-Bashir and UN Secretary-General Ban Ki Moon.

Ms Badawi will share her knowledge on how the media covers the world’s biggest issues. She has great authority in front of the camera, enabling her to draw on her dedication and understanding of international affairs to explain the issues behind the headlines.

The event will be moderated by Dr Michael Frendo, Former Minister of Foreign Affairs and Speaker of Malta’s House of Representatives. See his video message about this event: Micheal Frendo on Zeinab Badawi

Those wishing to attend are encouraged to register their interest on events@leadingtalks.com.mt

The event on 28 April starts at 10.30 am and will be held in the Portomaso Suite of the Hilton Malta. Registration opens at 10am.

Posted from WordPress for Android

Read all about me: https://ivanmconsiglio.wordpress.com/about-ivanmconsiglio/
View all posts by ivanmconsiglio →
This entry was posted in Uncategorized and tagged Zeinab Badawi. Bookmark the permalink.