Posted on April 2, 2015 by ivanmconsiglio

‘To honour the brave people I award the George Cross to the Island Fortress of Malta to bear witness to a heroism and devotion that will long be famous in history’. 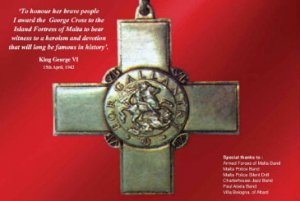 This proclamation was issued by King George VI, on 15 April, 1942, to honour the people of Malta. The honour bestowed was a sign of appreciation by the British Monarchy for the bravery and tenacity that was shown by the Maltese people during the darkest moments of the Second World War.

The actual George Cross medal was brought over to Malta by Lord Viscount Gort, VC., who had just been appointed and sent to Malta as Governor and Commander-In-Chief. However, the actual ceremony of the presentation was held much later, on September 13 of the same year. The ceremony was held in St George’s Square, Valletta. Chief Justice Sir George Borg received the medal on behalf of the Maltese nation.

The Malta Tourism Authority will once again be commemorating this event on April 14th 2015 inside the very same square where the original ceremony was held 73 years ago.The programme will start at 19.30 hrs with a marching display in the square by the Armed Forces of Malta Band, who will be escorting the George Cross medal inside the President’s Palace. A display by The Malta Police Band and the Malta Police Silent Drill Squad will follow.

A son et lumiere will follow, which will depict the events that led to the awarding of the GC medal.

The public is welcome to attend. Admission is free, however seating will be available only if pre-booked. 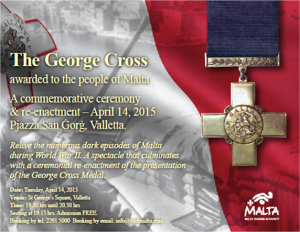