THE CASE FOR CAMPFIRES

Posted on October 24, 2019 by ivanmconsiglio

Stories told in the glow of a blaze – and the campfires themselves – have been an inviting part of Scouting since its earliest days. But are they relevant in the age of the internet, cell phones, and Leave No Trace? I very much think so !!

Spurred on by the likes of Greta Thunberg, the UK scout movement is now engaging with social problems

I was inspired and motivated to hash up (or rehash, to be honest!) this opinion piece, on reading a newspaper report online by The Guardian, titled:

TINDER FOR THE FIRE, KINDLING FOR THE BLAZE

Robert Baden-Powell, Scouting’s founder, recognised the power of campfires long before the formation of the Scouts Movement. At Scouting’s first campout held at Brownsea Island off the coast of England in 1907, Baden-Powell hosted a campfire each evening. With the light of the flames dancing in his eyes he shared stories, sparkling with excitement and meaning. “Baden-Powell used to tell us about his adventures in Africa and India” said one of the Scouts who had been there. “And on a nice summer night with him standing in the center of the ring and telling these tales…that was the highlight of the camp.” 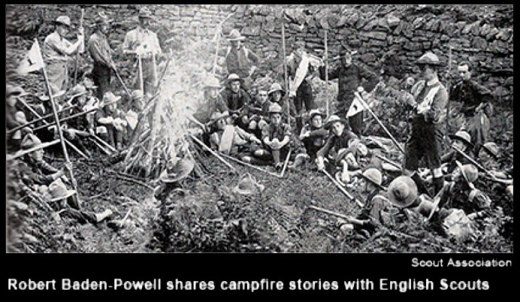 Early supporters of Scouting had a similarly positive view of campfire experiences and what the lack of them would mean to the outdoor experience. So, “What is a camp without a camp-fire?” we ask ourselves now. “No camp at all but a chilly place in a landscape where some people happen to have some things.”
Scouts had incorporated the ‘campfire’ in its program for council and friendship and story-telling. The mystic glow of the fire quickens the mind, warms the heart,, and awakens memories of happy glowing tales that fairly leap to the lips. 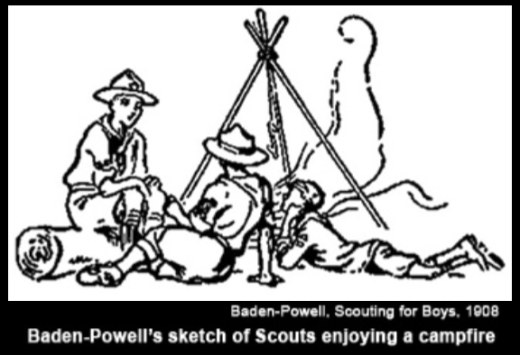 The principles of Leave No Trace discourage campfires except where they will cause no harm to the environment. That eliminates them today from many backcountry settings abroad, if not locally as well.
A front country site such as our Ghajn Tuffiegha campsite caters for this to some degree, since it provides the ideal setting for evening campfires that fit Leave No Trace guidelines. A campfire can be a quiet affair with just a few people, or a big event with a program planned for dozens of Scouts or more and their families, as we Maltese are more used to do.

BELOW: FUN AROUND A SCOUT CAMPFIRE

There remain many type of fire builds to chose from for an evening campfire. It looks good before it is lit, a consideration for programs when Scouts will arrive before a match has touched the tinder. Those building the fire set-up, should use plenty of tinder and kindling so there’s no doubt the fire will burn. Additional fuel wood nearby can be used to adjust the level of the flames through the evening. 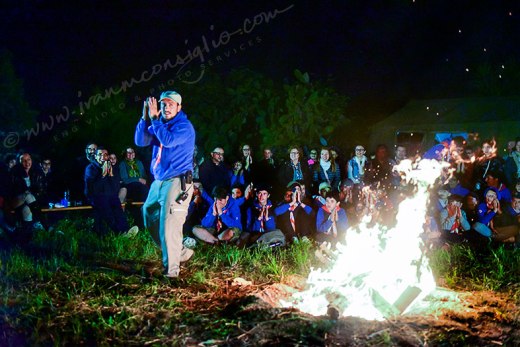 ABOVE:  LEADING SONGS AND TELLING STORIES

A small group might be satisfied visiting as they watch a campfire turn to coals. A more formal program usually includes stunts, skits, songs and stories presented by some or all of the Scouts present. Big campfires are opportunities for youth leaders to practice planning a program, organising presenters, and performing in front of an audience. Plenty of preparation insures that stories, skits, and songs aren’t too long and that they hold the interest of everyone. Many campfires end with a short address to those gathered by the Group Scout Leader  – often a story from the Group’s past history from this adult leader’s life experiences in Scouting,  which inspires listeners with a memorable message.

Below: The GSL’s minute.

What hasn’t changed in this age of computers and cell phones is the joy of a good campfire, built in the right place and managed in the right way. With warmth and light it can be a high point of many Scout outings today, just as it has been through the decades.
POST SCRIPTUM:   TO CATCH A GLIMPSE OF A VIRTUAL CAMPFIRE AND A ROBOT ADULT SCOUT LEADER, CLICK TO MY FOLLOWING BLOG POST: https://wp.me/p1hrGY-t9

Two books that tell the story of our great movement!

Scouts: The stories that built a movement

A book for every Scout, past, present, and future. This is the story of the Scouts. This inspiring book has sections on the history of Scouting Scouts today and how Scouts have gone to become rock stars astronauts and presidents. Scout Ambassador for World Scouting Bear Grylls provides a foreword to this amazing book.

The Boys on the Island – A Brownsea Adventure

The book tells the story of the first Scout camp on Brownsea Island. Written by Luis Bernando Perez and printed in Mexico City at the print shop of Rodrigues Hnos. Impressers, under the supervision of Alberto Rodriguez Luna. Editorial care was in the hands of Arturo Reyes Fragoso, with the collaboration of Glenn Gardner who did the translation. Proudly all those mentioned here are Scouts.

Read all about me: https://ivanmconsiglio.wordpress.com/about-ivanmconsiglio/
View all posts by ivanmconsiglio →
This entry was posted in GENERAL OBSERVATIONS & THOUGHTS, Malta, MY PIC SNAPS, Scouts, Scouting, Scout, The Malta Scouts Association, TSAM and tagged campfire. Bookmark the permalink.

1 Response to THE CASE FOR CAMPFIRES